Chad M. Stonebrook has been licensed to practice law in Ohio since 2012. He graduated from Capital University Law School in 2012 and from The College of Wooster in 2009 where he majored in History, and minored in Political Science and Education. Chad is licensed by The Supreme Court of Ohio and all Courts of the State of Ohio; and The United States of America Southern and Northern Districts of Ohio.

Chad’s practice focuses on civil litigation, personal injury, real estate, employment law, landlord/tenant disputes, arbitrations, and business law. He spent over two years working on a major copyright infringement and anti-trust case based out of the Northern District of California. He litigated a franchisor/franchisee dispute that resulted in arbitration in Miami, Florida. He settled a million-dollar adversary proceeding in the Ohio Southern District Bankruptcy Court, and has argued in front of the Ohio Court of Appeals. Chad has settled personal injury and defective joint replacement cases. Chad is a member of the Ohio State Bar Association and Columbus Bar Association.

He spent three summers clerking for Critchfield, Critchfield, and Johnston in Millersburg, Ohio. He also completed internships at NiSource, Inc., The Ohio House of Representatives, and The Ohio State University Athletic Compliance Department. Chad is a former District 7 Council of Delegates Representative for the Ohio State Bar Association. He serves as the Chairperson for Columbus Bar Association Notary Committee, as well as their Prosecutorial Committee. He currently serves as a Board Member for Destination Hilliard.

He is a member of the American Association for Justice, Hilliard Optimist Club, and is a former President of his local AM Spirit Business Connections Chapter. Chad was selected by Super Lawyers as a 2019 recipient of the “Rising Stars” award. In 2018, he was a Top 40 under 40 litigator by the American Society of Legal Advocates.

Chad resides in Grandview with his wife, Emily, a pediatric resident at Nationwide Children’s Hospital. They have a daughter, Kate. Chad enjoys spending time with family and friends, playing sports, and rooting for local Ohio professional and college teams. 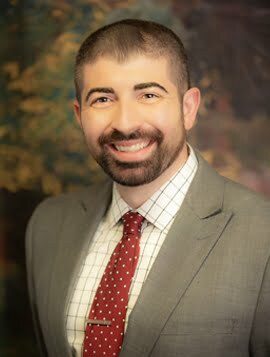 Some examples of Mr. Stonebrook’s experience include the following.

The College of Wooster, 2009 The Capital University Law School, 2012

Married to Emily, a pediatric resident at Nationwide Children's Hospital Chad also enjoys all Cleveland sports, The Ohio State Buckeyes, and participating in (and winning) many local recreational sporting activities.

For my first lawyer that I needed to represent me, I was doing my research. With Sunni I felt a connection. When you feel a connection, that’s when you can trust someone. Sunni and the firm are really mindful of the clients’ needs and their time. I feel like they did an exceptional job.